Recently, there has been significant attention given to weight gain advertisements found in magazines from the 30s, 40s, 50s, and 60s. The advertisements, for products with names like “Wate-On,” “Kelp-A-Malt,” and “Ironized Yeast,” seem strange to readers in a day and age when women are under so much pressure to lose weight. However, if you look a little closer at the advertisements, it quickly becomes clear that the message is basically the same now as then: women need the right kind of curves to be attractive. 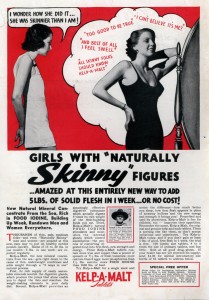 Consider this ad for Kelp-A-Malt. When you look at the two figures, what is primarily being contrasted? The profile shot of the skinnier woman with her shapeless shift and slouching posture shows that she is completely flat-chested. By contrast, the woman by the mirror, shown at a 3/4 angle shows off her hourglass figure, especially the much-larger breasts, which are also angularly shaped in the fashion of the day and likely painted, based on the way they don’t seem to match the orientation of the rest of her figure.

Similar is this ad for Ironized Yeast tablets from 1936, in which a man, whose painted face makes him look very much the movie star, compliments a woman on her weight gain. In the “before” picture the woman’s pose eliminates any bosom she may have had, whereas in the after picture, her figure is clearly visible. This advertisement seems to also be stressing the attractiveness of thick thighs along with the bosom. Similar to the pressure put on Minka Kelly and Sofia Vergara, women’s bodies are constantly undergoing scrutiny and women feel pressure to conform. Numerous industries have sprung up to profit from women’s vulnerability on this issue. Is plastic surgery, and breast augmentation in particular, doing the same thing? Yes, with a couple of important distinctions.

Breast augmentation is not for everyone, and it should not be undertaken lightly, but for some women it is a path to increased confidence and a better self-image. We are born into a world where the rules of the game have already been set up, and when we look at the hand we have been dealt, it often it seems the deck has been stacked against us. We all have mechanisms for coping in this often-cruel and unforgiving world. Some rage against the game and try to leave the table. Some try to play the hand they’re dealt as best they can. Some try for a new draw. If you are thinking about drawing a new pair in Philadelphia, please contact board-certified plastic surgeon Dr. David A. Bottger today.