Home/Blog / What Larger Breasts Can Do, According to Science

What Larger Breasts Can Do, According to Science 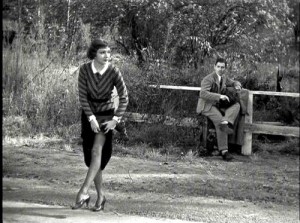 I love the scene in It Happened One Night where Claudette Colbert shows up self-proclaimed master hitchhiker Clark Gable when she stops a car by just showing her leg. Now science has shown that busty hitchhikers would also fare significantly better than those with smaller breasts. This is according to “Bust Size and Hitchhiking: a Field Study,” published in the innocuous journal Perception and Motor Skills. The study utilized a woman with a bra that permitted variation in her breast size, who stood by the roadside and attempted to get a ride from 1200 French motorists of both genders. The study found that increased breast size was associated with significantly more help from male drivers, but not female drivers. (It’s worth noting that other studies have shown that blonde hair and smiling (for women, but not for men)increase your odds of getting help.) Another study used a similar enlargeable bra to study impact of breast size on the number of times women were approached in a bar. “Women’s Bust Size and Men’s Courtship Solicitation” was published in Body Image by the same researcher who performed the hitchhiking study. It found that when the woman’s breast size was increased, she was approached more often by men. The researcher considers this a “real-world” test of a woman’s attractiveness, but it’s worth noting that both these studies were conducted in France, where, according to the eye-tracking study, men are among the most breast-obsessed in the world. “Determinants and Consequences of Female Attractiveness and Sexiness: Realistic Tests with Restaurant Waitresses,” published in the Archives of Sexual Behavior, looked at the relationship between breast size, self-reported attractiveness, hair color, and tips for female waitresses in the US. This study found that waitresses with larger breasts tended to receive more tips than waitresses with smaller breasts. Waitresses with bra cup size A or B received about 35% fewer tips than waitresses with bra cup size C, while those with bra cup size D and larger received at least 35% more tips than waitresses with bra cup size C. It’s worth noting that in this study bra cup size was also positively correlated with self-reported attractiveness, so it’s possible that the effect is actually due to women’s self-confidence and not their bra size. These studies do tend to confirm the general hypothesis that women with larger breasts receive a number of social benefits, which would tend to explain why they have been selected for in human evolution. This is not to say that a woman who gets breast augmentation will see any of these benefits, assuming she even wants them. Women are encouraged to get breast augmentation only if they believe the procedure will help them feel more attractive and self-confident. If you are considering breast augmentation in Philadelphia, please contact board-certified plastic surgeon Dr. David A. Bottger for a consultation to determine if the procedure is right for you.