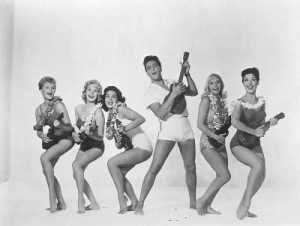 It may seem surprising, but the bikini turned 65 this month. The first bikini was designed by Louis Réard and debuted on July 5, 1946. Apparently, the suit was so small that at the time the designer had a hard time finding a woman who would wear it in public. However, a 19-year-old French showgirl (who had probably often worn less during her cabaret performances) volunteered to show the suit at a Paris swimming pool. With such concern about propriety among swimsuit models at the time of its invention, it’s not surprising the bikini took a long time to catch on. It really became mainstream in the United States during the 1960s, as evidenced by the No. 1 summer hit from 1960, “Itsy Bitsy Teeny Weenie Yellow Polka Dot Bikini.”

Itsy Bitsy Teenie Weenie Yellow Polka Dot Bikini This novelty song by then-16-year-old Brian Hyland comes at the cusp of the bikini’s acceptance. Although the song’s tone mocks the girl’s reluctance, US culture was at the time struggling with her over whether a bikini was really too risqué for public consumption. Consider this promotional still for Elvis Presley’s Blue Hawaii (1961).

Elvis Presley and five women in swimsuits, but not a two-piece in sight. But that was all soon to change. In 1962, Ursula Andress emerged from the surf wearing her iconic white belted bikini, and in 1963 bikinis became mainstream with the debut of Beach Party. In this promotional still for the film, Annette Funicello is actually wearing a bikini. 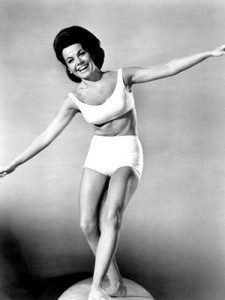 It may not be “itsy bitsy” by any stretch of the imagination, but, crucially, you can see her navel (though the pose she’s in obscures it somewhat). This is significant, and strictly a big-screen phenomenon. The belly button was considered too much exposure for TV as late as 1970. Nowadays, of course, the bikini is fully accepted and a common sight on our beaches. Many women, though, still feel nervous about wearing a bikini, not because it is too risqué, but because they are uncomfortable with their appearance. If you really want to look good and feel comfortable in a bikini but feel that your small breasts just make you too self-conscious, perhaps breast augmentation may be for you To learn more about breast augmentation and whether it might be right for you, please contact Philadelphia plastic surgeon Dr. David A. Bottger to schedule a consultation today.