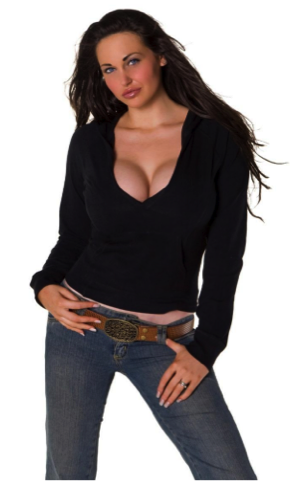 Although you may be tempted to put this in the category of “I could have told you that,” market researchers from around the world showed an image of a cleavagey brunette and used eye tracking software to determine where men and women fixated on the image. The results are more interesting than a bare summary of the findings would suggest.

Researchers from 7 different countries showed this image to 15 men and 15 women from their country for 20 seconds. During the 20 seconds eye-tracking software was used to determine where people were looking. The results were then compiled to determine gender and international differences. Researchers found that, on average, men spent 37% more time looking at the woman’s cleavage than women did, though the exact disproportion varied from country to country. In France, although men spent more time looking at the cleavage than any other country except Denmark, the disparity between men and women in time spent looking at the cleavage was less than any country, barely 9% difference separated the genders. In Denmark, however, men spent the most time looking at the cleavage and it was double that spent by Danish women. Women spent significantly more time gazing at the woman’s ring, about 27% more than men did, though in the first seconds men and women spent about the same amount of time looking at the ring. Gaze plots show that overall women spent more time looking at the details of the woman’s style, including her belt and fingernails, in addition to the ring. The study also showed that, overall, both men and women spent the most time looking at the woman’s face. However, they did not look at the same features of her face. The majority of women fixated on the woman’s eyes, while men tended to gaze longer at her lips. After looking at the picture, men and women were asked to rate the woman in the image. About 75% of men and 45% of women rated her as “attractive” or “very attractive,” with the biggest difference in the category of “very attractive”–about 27% of men gave her that rating and just over 5% of women. Men and women also differed in their description of the woman. About 50% of men described her as “sexy” and only 20% described her as “vulgar/common,” but for women were about equally divided between the two categories. Men were also much more likely to find her “charming,” and, in another category “sympathetic.” The ratings tease out the impact the figure’s features have on men and women, her extravagant cleavage bringing out sympathy in men, and derision in women. This confirms the results of previous eye-tracking studies that show men’s tendency to focus on a woman’s breasts, though it also shows that women spent about 10% of their time looking at the woman’s breasts as well. This study did not show that men spent as much time gazing at a woman’s waist, which probably relates to the stimulus used–in which the woman’s cleavage is prominent and her waist is obscured by her clothing and pose. Women who want to look more attractive are often concerned with the appearance of their breasts, which is part of the driving force behind the popularity of breast augmentation. If you would like to learn more about breast augmentation in the Philadelphia area, please schedule a consultation with board-certified plastic surgeon Dr. David Bottger.