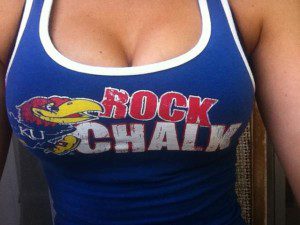 With Kansas University in the championship game for the NCAA men’s tournament tonight, attention has turned not only to the men of Kansas University, but to the women, with the twitter hashtag #KUBoobs spiking in popularity among Jayhawk fans and men everywhere. In the twitter trend, female KU fans are supposed to take pictures of their breasts in a KU t-shirt. Nudity is not encouraged, though some fans have taken it upon themselves to completely bare their support for the men’s basketball team.

As any time women’s bodies are put on display, there has been something of a feminist outcry against the trend, which claims that this is another instance of women being disempowered for men’s benefit. This controversy has been highlighted by local blogger Nog, on the Larryville Chronicles, who offered a feminist defense of the trend. The defense comes from a feminist scholar identified only by her twitter tag, @bananasuit who stated, “with #kuboobs, ladies are here to announce their fandom, loud and proud, and to seize their own place among the Apollonian body worship that’s synonymous with the NCAA basketball tournament. Its our answer to the phallic act of putting the ball in the hole.” Whereas women are traditionally relegated to the sidelines of the NCAA men’s tournament, #KUboobs gives them a way to be front and center. Many of the critiques leveled against #KUboobs are similar to those leveled against women who seek breast augmentation, the sense that women only do it to please men. However, women generally seek the procedure for themselves, not for husbands or boyfriends, who, more often than not, are satisfied with their partners’ breasts. Instead, women do it, as @bananasuit stated about #KUboobs, ” We’re doing it because we can, and because no one can tell us not to. It’s because now we understand that women can be sexual and still be powerful.” If you are unhappy with the appearance of your breasts, you are the only one who can tell you whether a breast augmentation is right for you. If you have decided it is what you want, please contact Dr. David A. Bottger in Philadelphia for a consultation.