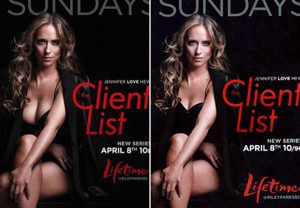 Last week, buxom actress Jennifer Love Hewitt revealed a nightmare she had about losing her breasts. She said she was trying to work when someone put tubes in her breasts and began making them smaller. She cried out “Guys, don’t take them away!” Hewitt has suffered significant manipulation of her breasts in the public advertising campaign for her new series The Client List. The racy advertising campaign showed her cleavage. In some venues, Hewitt was given what was described as a digital breast reduction, as photo editing was used to conceal her cleavage.

In other circumstances, the image was blown up to gigantic proportions, and on the Jimmy Kimmel show, Hewitt was confronted with a square from one such billboard, showing her cleavage in proportion larger than her entire body. In response, she cried out and claimed that it looked like an advertisement for a horror movie, “They look like King Kongs,” she said of her breasts. The breast uncertainty that Hewitt is experiencing is of course increased by the publicity surrounding the current advertising campaign and by her overall public profile. However, it is similar to the type of breast anxiety that many women experience. In fact, many women suffer Hewitt’s nightmare for real, as their attractive breasts shrink or become saggy with age or after pregnancy. For thousands of women, relief from this condition is achieved using breast augmentation. Breast implants can be used to restore volume lost in the breasts and give a woman an appearance more like the one she desires. To learn more about breast augmentation in Philadelphia, please contact Dr. David A. Bottger, a board-certified plastic surgeon.